skip to main | skip to sidebar

The chassis for the 2LCV has now been run, and is to now come apart for a few modifications and improvements. 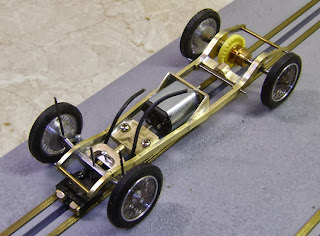 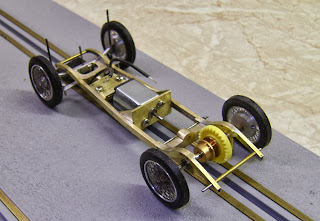 Work on the body is due to start over the next few weeks and is expected to take just as long as the chassis, completion next year sometime.

Wheels; A full range is no longer being kept in stock, and wheels will now only be made where there is some expectation that all will be used or sold.

Work on the Delage continues, the intention/hope being that the running chassis will be completed before the cold months arrive. 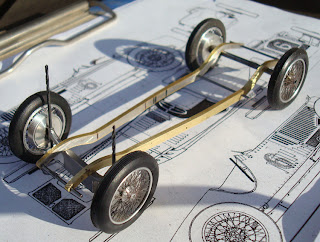 With the chassis rails completed (and roughly set up in the picture) the next stage will be to align the chassis and solder the cross tubes.
The rear axle will be mounted in ball bearings, the motor will be mounted about amid-ships and the front axle is still in the planning.

Wheels. All wheels are now being done in batches, my intentions of stocking all sizes having been totally abandoned due to costs.
A limited number of wheels types are still available, as shown on the website.

The planned new wheels are still to be made, though may now be delayed.

With the wheel project having achieved all which was required and is now able to tick-over as and when, attention is now slowly being concentrated on the mass of projects on the go.

The latest car back on the table is the Delage 2LCV, started last year, but partially shelved due to other commitments.

A recent burst of enthusiasm saw the front axle completed in prototype form. 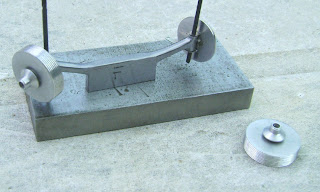 The axle is in steel, the drums, hubs and backplates are in aluminium.

The 'brake drums' are mounted on ball bearings which in turn are mounted on hubs attached to the streering knuckles, which are etched stainless steel. 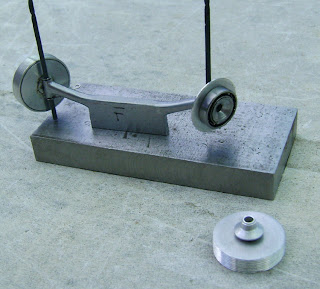 ﻿
The internals are pretty closely packed with minimal clearances, but all semms to have worked out pretty well. The rear axle is well on its way, whilst the chassis has recently been started.

Wheels. Out with the old, in with the new.

Things have been a bit hectic of recent with rather more wheel sales than I really want, though things are now settling down. One set a week suits me fine!
A lot of the old wheels are now done with with just a few of the slower moving or over produced wheel types remaining.

A new etching company has done some good work for me, a few hiccups but now hopefully a more consistent part will now be forthcoming.
All new parts now will be low volume compared to earlier efforts, with rarely more than 10 car sets made. 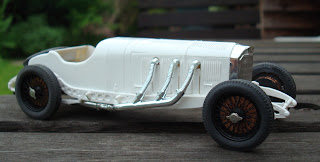 The latest wheels to be made are these, for the Mercedes SSKL. Not strictly correct, they should be 20" but are actually a scale 21".

As with most wheels, the 21" range are slowly being both refined and expanded. Originally made only for the advanced modeller to be built in 'open' form, solid centres have been introduced (which are fine for the cars with big brakes) and the standard 4mm rims are to be complimented by a small number of 5mm rims.

Another recently introduced wheel is one of the many fitted to the P3 Alfa Romeo. These are a later version as with the 1935 German GP car though seen a little earlier. 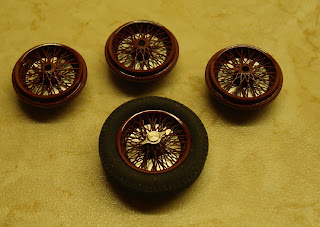 Consideration is being given making a few more 60 and 72 spoke x 19" Borrani wheels in a simplified form and thus at a slightly reduced price.

New wheels for both Mercedes and Auto Union with large rear wheels are soon to be available, whilst suitable wheels for early Auto Union, pre-war Delahaye, Delage and Talbot are now on the cards. In addition, wheels to suit circa 1930 Indy cars will be made, with a very small number of FWD Miller wheels available.

More in the not too distant future.

The wheel project is continuing to shrink, with the last stock of 16" wheels slowly going. Small batches will appear from time to time, since most frets contain several wheels, so for example if I need 19" Borrani or some other wheel, I also get ERA and Austin TC.

The project also expands in other ways. The range of 19" wheels continues to expand, together with new 18" and 21" wheels. To join these, further 17" wheels are planned.

Most of the new stuff will be very low volume, thereby costing a little more and of course easing my workload. It is meant to be a hobby, after all...

Pictures in due course once the first 'production' wheels are built up.

The wheel project has now passed its peak and is settling down to a somewhat reduced range. The 15" wheels are now effectively history and most 16" wheels will shortly follow.

Larger sized wheels will progress, with new wheels for bothEuropean and Indy cars with a pleasing increase in accuracy.

Plenty going on otherwise. A modest interest in racing has led to an improved George Turner MGC, as per the pictures. 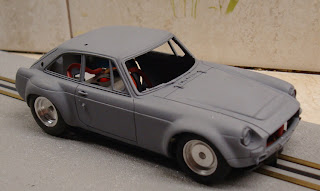 I did one of these cars a while back, but for a car I much admire, it needed a little more. A conversion was thus decided upon, and as one who is pleased with the Slot it productions, I went for a Slot it chassis, complete but slightly modified. GT is of course doing a Clubman version now, this car will be raced against such a car rnext month. 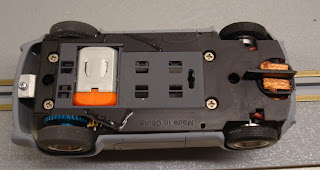 No great changes made except for the rear axle. The 312PB chassis used was just a little wide, so special wheels were in order.


All is now looking good. The first tests are over and are satisfactory, the body now has colour, more in due course.

It's been a while since I posted anything on here due to numerous issues, but I think it's about time I showed something new. A selection of DB4 and DB4 GT shots below. The GT kit is available in very limited numbers as is the DB4. Eventually kits will be phased out completely as they have me running around like a madman for not much return. I'll be concentrating on RTRs as I love to build them up and putting kits together really doesn't do much for me. Add to that the fact that the weather and the lack of suitable space makes casting shells more of a chore than anything, i'll be glad to see the back of them. 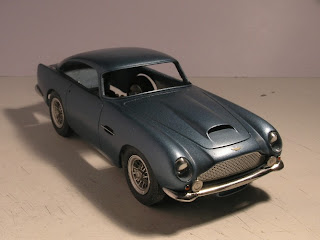 The model above is being built for a client who asked if it was possible to put together a specific car. This is chassis no. DB4GT/0120/L which is the only GT ever to run in the Tour de France. The colour is Elusive blue. 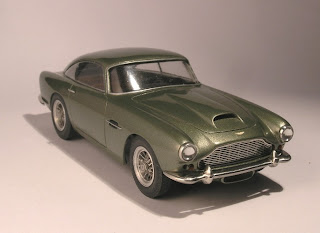 A standard DB4 above finished in California Sage with clear lacquer. 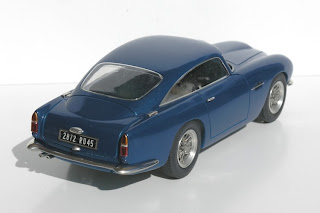 A rear shot of a road going GT. 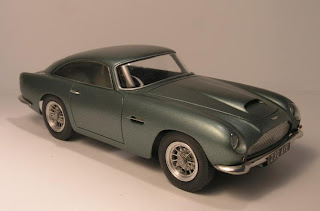 Another road version of the GT. 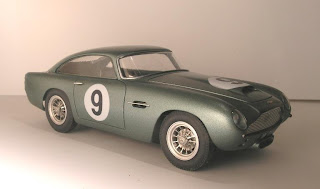 And a competition version.

GP Miniatures has now been re-designed. It looks quite lovely.